To distinguish JHipster UAA from other “UAA”s such as Cloudfoundry UAA, JHipster UAA is a fully configured OAuth2 authorization server with the users and roles endpoints inside, wrapped into a usual JHipster application. This allows the developer to deeply configure every aspect of the user domain, without restricting on policies by other ready-to-use UAAs.

Before digging into OAuth2 and its application on JHipster microservices, it’s important to clarify the claims to a solid security solution.

Since microservices is about building mostly independent and autonomous applications, we want to have a consistent authentication experience, so the users won’t notice their requests are served by different applications with possibly individual security configuration.

The core benefit of building microservices is scalability. So the chosen security solution shouldn’t affect this. Holding the users session state on server becomes a tricky task, so a stateless solution is highly preferred in this scenario.

There is a need of having a clear distinction of different users, and also different machines. Using microservice architecture leads to building a large multi-purpose data-center of different domains and resources, so there is a need to restrict different clients, such as native apps, multiple single page applications etc. in their access.

While maintaining centralized roles, there is a need of configuring detailed access control policies in each microservice. A microservice should be unaware of the responsibility of recognizing users, and must authorize incoming requests.

No matter how much problems a security solution may solve, it should be strong against vulnerabilities as best as possible.

Using stateless protocols is not a warranty of the security solution is scalable. In the end, there should not be any single point of failure. A counter-example is a shared auth database or single auth-server-instance, which is hit once per request.

Using the OAuth2 protocol (note: it’s a protocol, not a framework, not an application) is satisfying all 6 claims. It follows strict standards, what makes this solution compatible to other microservices as well, and remote systems, too. JHipster provides a couple of solutions, based on the following security design: 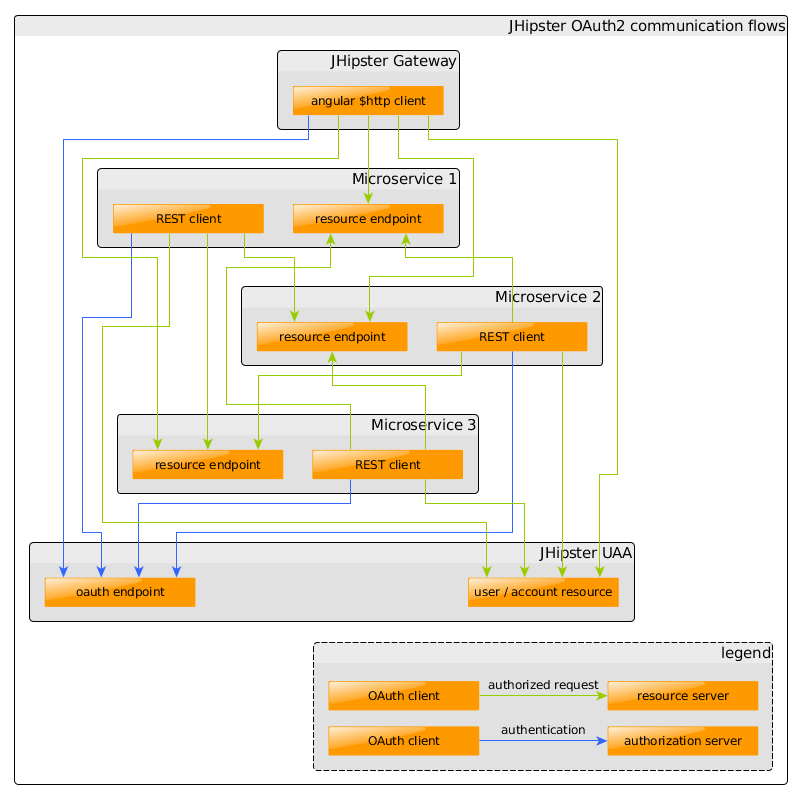 This design may be applied to any microservice architecture independent from language or framework.

As an addition, the following rules can be applied for access control:

When scaffolding a JHipster microservice, you may choose the UAA options instead of JWT authentication.

Note: the UAA solution is also using JWT, which are addressable to custom configuration as well as JWT, using default Spring Cloud Security.

The very basic setup consists of:

This is the order in which it should be generated.

In addition to the authentication type, the location of the UAA must be provided.

For very basic usage, this setup is working the same way as it does for JWT authentication type, but with one more service.

The JHipster UAA server does three things out of the box:

The choices of a database, cache solution, search engine, build tools and further JHipster options are open to the developer.

When a microservice boots up, it usually expects the UAA server is already up to share its public key. The service first calls /oauth/token_key to fetch the public key and configure it for key signing (JwtAccessTokenConverter).

If the UAA is not up, the application will continue to start and fetch the public key at a later time. There are two properties - uaa.signature-verification.ttl controls how long the key lives before it is fetched again, uaa.signature-verification.public-key-refresh-rate-limit limits requests to UAA to avoid spamming it. These values are usually left at their default values. In any case, if verification fails, then the microservice will check if there’s a new key. That way, keys can be replaced on the UAA and the services will catch up.

From this point there are two use cases that may happen in this basic setup: user calls and machine calls.

For the user calls, a login request is sent to the gateway’s /auth/login endpoint. This endpoint uses OAuth2TokenEndpointClientAdapter to send a request to the UAA authenticating with the “password” grant. Because this request happens on the gateway, the client ID and secret are not stored in any client-side code and are inaccessible to users. The gateway returns a new Cookie containing the token, and this cookie is sent with each request performed from the client to the JHipster backend.

For the machine calls, the machine has to authenticate as a UAA using client credentials grant. JHipster provides a standard solution, described in secure inter-service-communication using feign clients

The general flow for refreshing access tokens happens on the gateway and is as follows:

Here is a brief list of the very major things a developer should be aware of.

It is strictly recommended to use different signing keys as much as possible. Once a signing key gets into wrong hands, it is possible to generate full access granting key without knowing login credentials of any user.

If attackers manage to intercept an access token, they will gain all the rights authorized to this token, until the token expires. There are a lot of ways to achieve that, in particular when there is no TLS encryption. This was not a problem in the days of version 1 of OAuth, because protocol level encryption was forced.

As of standard, access tokens can be either passed by URL, in headers, or in a cookie. From the TLS point of view, all three ways are secure. In practice passing tokens via URL is less secure, since there several ways of getting the URL from records.

RSA is not required for JWT signing, and Spring Security does provide symmetric token signing as well. This also solves some problems, which make development harder. But this is insecure, since an attacker needs to get into one single microservice to be able to generate its own JWT tokens.

Currently only JHipster UAA is providing an scalable approach of secure inter-service-communication.

Since JHipster UAA is based on OAuth2, all these problems are solved on protocol definition.

This chapter covers how to get started with this.

When one service wants to request data from another, finally all these four players come into play. So it is important, to briefly know what each of them is responsible for:

In real world, there is no warranty of all instances of all services to be up. So Hystrix works as a circuit breaker, to handle failure scenarios in a well-defined way, using fallbacks.

But wiring and coding all these things manually is a lot of work: Feign provides the option of writing Ribbon load balanced REST clients for endpoints registered in Eureka, with fallback implementations controlled using Hystrix, using nothing more then an Java interfaces with some annotations.

So for inter-service-communication, Feign clients are very helpful. When one service needs a REST client to access an “other-service”, serving some “other-resource”, it’s possible to declare an interface like:

Similar to Spring Data JPA, there is no need to implement that interface. But you may do so, if using Hystrix. Implemented classes of Feign client interfaces act as fallback implementations.

One open issue is, to make this communication secure using UAA. To accomplish this, there should be some request interceptor for Feign, which implements the client credentials flow from OAuth, to authorize the current service for requesting the other service. In JHipster, you use @AuthorizedFeignClients instead. This is an annotation provided by JHipster, which does exactly that.

Considering the above Feign client should be used to an “other-service”, which serves protected resources, the interface must be annotated like this:

note: Due to a bug in Spring Cloud, it’s currently not possible to use a different notation for the service name, as

The REST client automatically gets authorized with your UAA server, when there is no valid access token stored in memory.

This approach addresses a scenario when machine request run over a separate OAuth client not referring to an user session. This is important, in particular when entity auditing is used on a request, issued by another request in another service. As an alternative, the access token of the initial request may be forwarded to further calls. Currently, there is no “default solution” provided by JHipster.

Components working with Feign clients should be testable. Using Feign in tests the same way it is used in production would force the JHipster Registry and the UAA server to be up and reachable to the same machine where the tests are run. But in most cases, you don’t want to test that Feign itself works (it usually does), but your components using Feign clients.

To test components, which are using feign clients inside is possible using @MockBean, which is part of spring boot since 1.4.0.

Here is an example, testing SomeService works as expected, with mocked values for the client:

So with this technology you are simulating the behavior of the other service, and provide expected resource entity, which would come from the origin. All Beans injecting a client will behave as mocked, so you can focus on the logic of these Beans.

Using Spring’s integration tests against the REST controllers is usually bypassing the security configuration, since it would make testing hard, when the only intention is to prove the controller is functional doing what it should do. But sometimes, testing a controller’s security behavior is part of testing, too.

For this use-case, JHipster is providing an component called OAuth2TokenMockUtil, which can emulate a valid authentication without forcing the user or client to exist.

To use this feature, two things have to be done:

In this test no single instance of the controller has to be mocked, but the application’s WebApplicationContext

The util offers a method “oaut2authentication”, which is usable to MockMvc “with” notation. Currently it can be configured to mock a authentication with the following fields:

Here is an example: